James Lancelot retired from the post of Master of the Choristers and Organist of Durham Cathedral in 2017 after thirty-two years.  Prior to that he was successively a Chorister of St Paul’s Cathedral (where he sang at the funeral of Sir Winston Churchill), Organ Scholar of King’s College, Cambridge and Sub-Organist of Winchester Cathedral.  He studied with Ralph Downes, Gillian Weir and Nicholas Danby.  During his gap year 49 years ago he studied at the RCM, while living at the RSCM headquarters in Addington Palace.

At Durham he took responsibility for the cathedral’s musical ministry, at whose heart are the services sung daily by the Cathedral Choir.  Under his direction the choir maintained its reputation as one of Britain’s leading cathedral choirs; it was expanded by the recruitment and admission of a team of girl Choristers in 2009.  During that time the choir broadcast, recorded and toured regularly; but its priority, as always, was the daily Opus Dei – daily Evensong, together with Matins and Sung Eucharist on Sundays.  While covering a broad repertoire, it was not afraid to tackle new music; it gave seven first performances in 2013.  James was also instrumental in the founding of the cathedral’s second choir, Durham Cathedral Consort of Singers, in 1997.

James was appointed a Lay Canon of the Cathedral in 2002, and also held the appointment of Durham University Organist.  He holds Honorary Fellowship of the Royal School of Church Music, the Guild of Church Musicians, and St Chad’s College and Hatfield College, Durham; in addition, Durham University conferred an Honorary Doctorate of Music on him in 2014.  From 1987 to 2013 he was Conductor of Durham University Choral Society.  He is a Past President of the Incorporated Association of Organists.  In 2016 he was one of the first recipients of the Archbishop of Canterbury’s Cranmer Award for Worship.

Between September 2018 and Easter this year James was Interim Organist and Director of Music at Worcester Cathedral.  In addition, he pursues an active recital career both in Britain and abroad; he has given concerts in almost all English cathedrals and in many European countries as well as New Zealand, the USA and Russia.  He has many broadcasts and recordings to his credit, including two DVDs on the organ of Durham Cathedral.  His recording of Bach’s Orgelbüchlein was released in 2016 and a further Bach recording was released in 2017.  Engagements this year include a Christmastide performance of Messiaen’s La Nativité du Seigneur in the Philharmonie Essen, a recording of music by Sweelinck on the Metzler organ in Trinity College, Cambridge, and recitals in Britain and on the Continent.  Next year sees invitations to Paris, Germany, Sweden and the USA.

Upon his retirement, the Bishop of Durham appointed James as Canon Organist Emeritus of Durham Cathedral. 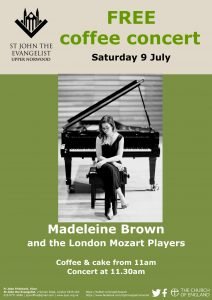 Do join us for an afternoon of fun and refreshment, eat at the barbecue, quench your thirst with a P[...]