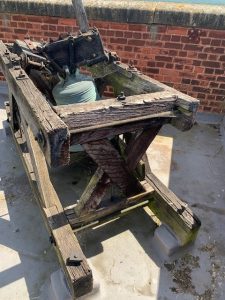 For several years the tolling bell of St John’s has been silenced, as the weather of nearly seven decades at last took its toll on the exposed frame, and as you can see from the attached photograph, caused the mechanism which holds the bell and allows it to swing and in turn be struck to collapse.

We are not used to churches which do not have a functioning bell to call people to worship.  Perhaps this past year, though the bell would not have been rung to call people into church as the building has been in lockdown mostly, it has had a well-deserved rest.  Though saying that, had the bell frame survived, the bell would have been tolled daily to remind the people of this community that your parish priest and others attend to prayer daily for and on behalf of all in this parish.

However, we are where we are, and finally yesterday, after a long time working through the legal process within the Diocese, the bell was lifted and the frame removed so that a new frame can be made over the coming months, and our call to prayer and worship can be reestablished.

At St John’s there were meant to be two bells in the building. ‘Big’ John, which was not affordable to the parish when the church was being established.  But the bell many of you will have heard was purchased and named (according to our Parish papers) ‘Little’ Jonathan.

So, it was the purpose and will be again for little Jonathan to remind the people of this parish, and wherever the wind blows the sound of our bell, that we are preparing for or are in the middle of worship.

I am extremely grateful to Michael Robertson and Rachel Rae for the tremendous amount of work they have done, which has got us to this point and for their patience.  God willing and with a strong wind behind them, the Bell should be rehung within a new frame by early 2021.  Perhaps, just perhaps, our being able to gather properly again as a people of prayer and thanksgiving will coincide with Little Jonathan tolling out his cry to all who can hear, “Come and worship the living and true God. Come to St John’s, a house of thanksgiving and prayer”.

“Meditation is simple, being simple means being ourselves. It means passing beyond self-consciousness, self-analysis and self-rejection.” Laurence Freeman Free meditation session currently on Zoom. All are welcome. While the basis of this form of meditation[...]
Mar
16
Tue
9:00 am Morning Prayer
Morning Prayer
Mar 16 @ 9:00 am – 9:30 am

Last week, the Prime Minister laid out the government's timetable for the resumption of somethin[...]

Photo by Andrew Prior The pipe organ at St John’s is a remarkable instrument which is reporte[...]

Dear friends When I wrote to you on Wednesday, detailing the steps we were taking to keep St John[...]